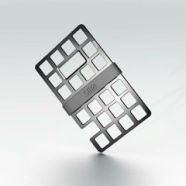 In cases where wallets or purses have insidiously grown to pocket bursting proportions, adopting the Silo Mesh Card may make for a refreshing change. This stylish titanium pocket accessory acts as an all-in-one streamlined wallet, smartphone stand, and bottle-opener that would do MacGyver proud.

The Mesh Card isn’t just about cracking open beers and preserving the line of a business suit however. From a security perspective, it’s more functional than the traditional wallet due to its faraday cage-like design, which can help protect cards from RFID theft.

What’s RFID theft, you may be wondering? In short, it’s a method that could be used by the 21st century pick-pocket to steal the details stored in the Radio Frequency Identification (RFID) Chips fitted on many bank, credit and identification cards. Techniques for achieving this vary, but generally involve a thief carrying an RFID card reader (perhaps hidden in a shopping bag) and reading the card details of people in close proximity. A card magnetizing device is then be used to transfer the stolen card number, expiry date and CVV number to a blank RFID card which can then be used. These techniques are reportedly becoming common in so-called “brush-past” attacks in busy areas such as railway stations or shopping malls.

Items that have been snuggly strapped to the Mesh Card using its silicone band will be provided with a degree of shielding from RFID transmissions (Silo have tested the Mesh Card using commercially available equipment). In our own experiments we have also found the Mesh Card to be effective at blocking transmissions after multiple attempts at waving it around in front of store payment scanners – no doubt irritating those waiting in the queue in the process.

Update: We’ve now had our Silo Mesh Card for well over a year and it’s still looking good. We thought the black coating on the card might have scratched or flaked off over time, but that hasn’t really happened. All we have done is replace the silicon band which was beginning to get a bit worn over time. Handily, Silo sell extras kits which come with five different colored bands and a spare bumper card.

Overall, the Mesh Card has been a solid purchase that still gets comments of the “ooh, what’s that… can I have a look” variety whenever left lying out.