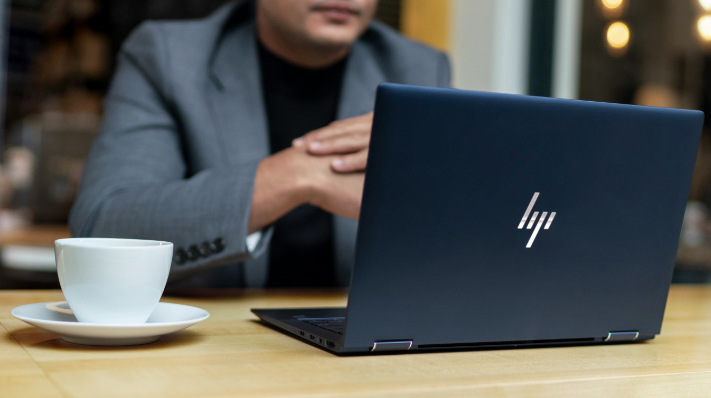 Cyber threats aren’t always easy to spot, but realising you’ve been an easy target could make an attack both infuriating and frightening.

For many of us, a good way to avoid becoming easy pickings for an attacker is selecting a device with built-in, easy to use security features.

As the laptop remains a trusty workhorse of modern businesspeople, we thought we’d scout around for the latest stylish but secure offerings.

The general technical specifications are very respectable, with the Dragonfly packing the following into its slim 2.2 pound (1 Kg) frame:

The Dragonfly features a 360 degree hinge design meaning it can also be used in tablet and tent configurations, which is useful for giving presentations round a table.

Speaking of presentations, the laptop also sports a 13.3 Full HD inch screen (upgradeable to 4K) with narrow bezels – which should make the colors pop out in just about any slide deck or video.

Lets start with security basics, which includes some form of authentication to protect your laptop from unwanted individuals poking around in your files while you’re away from your desk.

Strong passwords are a start, but come with various issues – not least the sheer number of them we have to remember. A password isn’t much use if it has to be ‘sneakily’ hidden on a post-it note under a keyboard or in the back of a diary.

Security features should be as transparent and effortless as possible.

The Dragonfly includes a fingerprint reader on the right-hand edge of the keyboard which integrates with the Windows Hello feature and helps makes secure logins fast.

The laptop comes in a ‘dragonfly blue’ magnesium alloy casing, which is noteworthy as the material is harder than steel but lighter than the aluminium contraction of many flagship laptops.

This physical durability is reflected in the MIL-STD-810G military standard the Dragonfly has been designed in line with; a demanding set of 19 tests which include shock, temperature resistance and liquid resistance.

So in short if you have a particularly rough working environment or worry about your laptop being bounced around in luggage, the Dragonfly is at the tougher end of the scale.

The thought of malware invisibly stealing personal data or doing other no-good has perhaps now convinced most people to use anti-virus and back up data. But in today’s cyber-conscious world ‘zero days’ are increasingly featuring in mainstream news headlines. Once the preserve of security specialists, the term refers to software holes that the manufacturer hasn’t had time (zero days) to plug.

Signature-based anti-virus will struggle to protect against exploits and malware that haven’t been seen before.

The Dragonfly laptop comes with HP Sure Sense, which attempts to address this issue by using deep learning (DL) algorithms that help it detect anomalies in baseline system behaviour. So instead of just scanning for the ‘usual suspects’ of the malware world Sure Sense looks for odd behavior, stops the process in its tracks and quarantines the culprit files.

HP have predicted that Sure Sense may be able to detect up to 99% of unknown malware in milliseconds. That’s admittedly difficult for us to validate, but where stopping an infection fast could make the difference in saving huge amounts of data (and money), anything that speeds up the defensive process over legacy anti-virus is a win.

Another benefit of DL-based malware detection like Sure Sense is that it isn’t continually reliant on downloading updates, like the more high maintenance signature based products.

Finally, on the anti-malware front we think the accompanying HP Sure Click feature is a really convenient way of quarantining untrusted files and content. With Sure Click enabled, browser tabs for unknown sites are opened in micro-virtual machines (micro-VMs) – simulated portions of an operating system separate from your actual machine.

If you visit an infected site any malware that attempts to execute in one of these micro-VM shouldn’t be able to get at your real operating system – a bit like a poisonous snake in an enclosure spitting venom against the glass. When browser tabs opened with Sure Sense are closed the micro-VM and any malicious code is deleted with it.

In truth, you could probably achieve a similar protective effect by installing some VM software like Virtual Box, setting up a full virtual machine and doing all your web browsing through it. But that sounds like a lot of effort for anyone busy or not already using virtualisation.

What we like about the Sure Sense feature is that it helps make avoiding the ‘drive-by’ download of malware as effortless as possible while browsing.

A common concern for people working in public while on the move is a nosey neighbour sitting viewing their screens.

This could range from being irritating if they’re enjoying one of your episodes on the cheap, to downright risky when you have valuable data spread across the screen. The scenario gets worse if the individual innocently fumbling with their phone next to you is actually filming your screen.

Up until now a way of protecting against the risk of ‘shoulder surfers’ has been to stick a screen protector on a laptop which restricted its viewing angles. This certainly isn’t a bad solution, but it feels like a it of a shame having to stick a plastic film over a beautiful new laptop screen.

The Dragonfly can be purchased with HP Sure View Protect, which digitally renders the screen in such a way that makes it difficult to view by anyone sitting next to you. The Sure View mode can be quickly toggled on and off using the laptop’s function keys.

We recently wrote about the importance of encryption for protecting data on a lost or stolen laptop, but as the saying goes an ounce of prevention is worth a pound of cure.

The Dragonfly helps prevent itself from being lost and you frantically searching your apartment through use of in-built Tile technology.

For the unfamiliar, Tile started out as a handy keyring which can be attached to valuables and then tracked or called from an accompanying smartphone app (assuming it has power and is within Bluetooth range).

This is the first laptop we’ve come across that you can track using the Tile app.

To wrap up, it’s still easy to imagine secure business laptops as heavy, square-cornered contraptions we have to drag around like a ball and chain.

The HP Elite Dragonfly combines good looks with a strong suite of security features in a lightweight package and is one of the best business laptops out there in our opinion.

As an amazon affiliate we may earn from qualifying purchases.