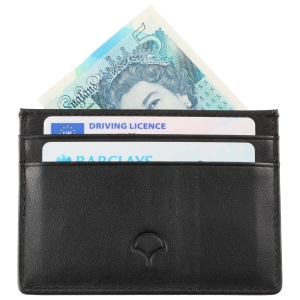 In our view, two card-carrying problems plague the modern urbanite: having a wallet compact enough that it doesn’t ruin the line of a suit, and secure enough that your card details don’t get harvested by a 21st century pickpocket as you negotiate your way through busy streets.

Enter the ATARA RFID Blocking Credit Card Holder. This stylishly designed and streamlined leather accessory can hold four cards, with a sleeve in the middle big enough to hold a few notes – making it ideal for the security conscious minimalist.

The ATARA wallet comes lined with an RFID blocking material that helps protect cards against RFID skimming, which for the unfamiliar is a form of contactless theft.

Techniques reportedly vary, but may involve a thief carrying a cloning device attached to a high frequency antenna – perhaps hidden in a shopping bag – that operates on the same frequency (13.56MHz) as a wireless payment reader in a shop.

Said thief can then pass close by an unsuspecting victim and read some of the details held on a card’s RFID chip; usually the long card number and expiry date.

A card magnetizing device might then be used to transfer the stolen details to a blank RFID card, which could then be used fraudulently.

Even if the 3-digit CVV security code often required for online transactions hasn’t been swiped, the risk remains that a thief with a cloned card could burn through a lot of money unnoticed through a rapid series of contactless transactions.

Sound far-fetched? Check out the video below featuring who woman reportedly had her debit card details stolen on a flight by a thief using a malicious smartphone app:

Attempts at these ‘brush past attacks’ are reportedly becoming common in busy areas such as subway stations or shopping malls.

Wallets with RFID blocking properties act as a kind of miniature Faraday cage and can be used to help to block malicious attempts to read your card.

But it’s not all about security of course. Overall, if you’re ready to consign an oversized wallet to the dustbin this product looks smart, with a feel (and smell) of high quality leather. On the other hand, if you’re looking for a reasonably-priced gift it also comes packed in a nice presentation box.