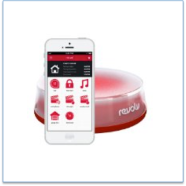 The rapidly-expanding “internet of things” is ushering in an exciting era of hi-tech households that are coming alive with wirelessly controllable devices such as lights, thermostats, speakers, smoke detectors and locks. However, one possible snag with developing a collection of such domestic gadgets is having to control them all separately using a variety of software interfaces.

aims to nip this problem in the bud by hooking all of these smart devices into a centrally controlled ecosystem. The idea is that each time a new device is purchased, it can be quickly connected to Revolv and then controlled using a universal iOS app.

In terms of compatibility, for connecting devices the Revolv hub supports a variety of commonly used communications protocols including Wi-Fi and Z-Wave; a standard specifically developed for home automation gadgets. Many existing household wireless items are already compatible with Revolv, including Sonos Hi-Fi speakers, Honeywell thermostats and the Kwikset Kevo Bluetooth Deadbolt.

Perhaps the most impressive feature of Revolv is the ability to set it to perform a variety of Actions – such as switching on some lights and turning up the thermostat just before its time to stagger out of bed in the morning. These Actions can be set to occur based on Time-Triggered, Geosense (GPS distance of the smartphone from home) or Manual (directly from the Revolv app) criteria. From a home security perspective, these features are particularly useful. The ability monitor and control devices such alarms, door locks and lights around the house could be of real reassurance; particularly for frequent travellers.